Southern Association of Wholesale Distributors Hosts Successful 99th Annual Meeting
The Southern Association of Wholesale Distributors (SAWD) held its 99th Annual Meeting from June 14-17 with great acclaim. During the event, nearly 80 vendors from across the country met with 50 wholesale distributors over two days. “The Southern is where business gets done, but it’s always been about more than that,” said VJ Mayor, CAE, CEO of The Southern. “The familial atmosphere and networking opportunities are what makes this association and this event so special.”

During the meeting, the group elected Chad Pickel of AMCON Distribution as the association’s new president. Pickel takes the helm after Lyons Specialty’s Hugh Raetzsch’s successful presidency. Raetzsch was recognized with The Southern Hershey Leadership Award for his contributions to the association and will assume the position as board chairman.

“Congratulations to all of the honorees,” added Mayor. “To be able to celebrate their accomplishments, not only to The Southern, but to the entire industry was amazing.”

The Southern also continued it’s longstanding Meetings with a Mission, with the conference raising $5,000 for K9s for Warriors. 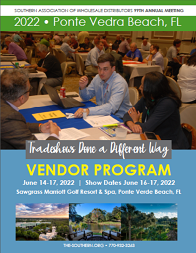